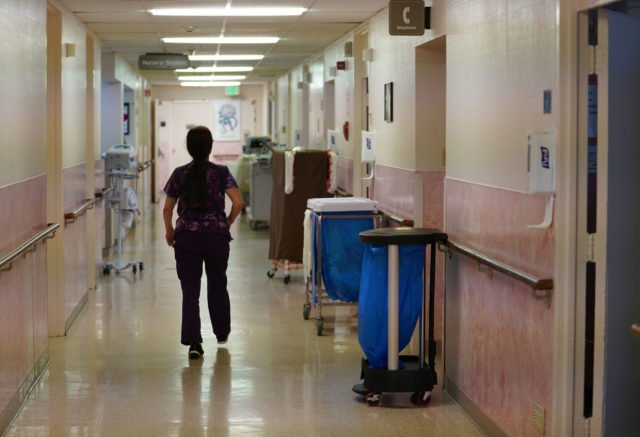 Civil Beat Article – ‘We Can’t Be All Things To All People’: Turning Around An Oahu Rural Hospital

‘We Can’t Be All Things To All People’: Turning Around An Oahu Rural Hospital

Wahiawa General Hospital has relied for years on state funds and cutting services to keep afloat. New management is trying to forge a different path to survive.

In the 1950s when Wahiawa General Hospital was new, the patients who filled its rooms were plantation workers and military personnel.

Today, much of the hospital’s foot traffic is concentrated in the emergency department, where kupuna rely on immediate assistance and surfers show up for stitches.

With the nearest hospitals a 30-minute drive away, the location of Wahiawa General Hospital is still critical for Central Oahu and North Shore residents. But keeping its aging doors open has been a long-term battle.

Its financial bottom line has plummeted as well. The hospital’s net income has been in the red for seven of the past 10 years.

Hospital executives have taken cost-cutting measures, like eliminating surgery, obstetrics and gynecology and home health, along with the doctor-in-residence training program.

“It’s a tough environment,” said Brian Cunningham, who joined the hospital as CEO in 2017. He was hired by the Texas-based Community Hospital Corporation to help turn things around. “We are going to be in the red again this year, but in this next year our hope is that things will turn around with the restructuring of our organization.”

Wahiawa Nursing and Rehabilitation Center has 93 beds and houses the hospital’s skilled nursing and long term care. Patient Rosita Yadao, 84, gets a lift from Leilanie Sacro.

As a new decade nears, it’s a time of reckoning for the hospital as the town around it transforms.

“We can’t be all things to all people and we can’t compete with all the other large hospitals,” Cunningham said. “That would be foolish.”

Wahiawa General Hospital has managed to stay open while more than 90 rural hospitals like it across the nation have closed since 2010.

The hospital’s emergency department has proven crucial to the financial health of the hospital, attending to more than 20,000 patients per year.

“It really is our sole source of admissions into our hospital,” Cunningham said. “It’s one of the few services that has remained stable or had a slight increase in volume for the last 10 years.”

Wahiawa General sees an even higher proportion of federally insured patients: approximately 85% of the hospital’s patients are covered by Medicaid or Medicare. By comparison, other rural hospitals have a Medicare/Medicaid patient population closer to 50% to 60%, according to Cunningham.

Declining reimbursement rates from the federal government for Medicare and Medicaid patients are among the reasons why so many rural hospitals are closing. The Great Recession in 2008 also had long-term effects.

Other obstacles have challenged the hospital’s finances.

Data from the Centers for Medicare and Medicaid Services show that the federal agency reduced payments to Wahiawa General Hospital by less than 0.7% each year between 2015 and 2018 because of excess re-hospitalizations.

CMS also reduced payments by 1% in 2016 and 2019 based on Wahiawa General’s rate of hospital-acquired medical conditions or complications such as infections.

Service cuts have had a heavy impact on the community, which already faces economic inequality.

“It’s hard for a lot of our more vulnerable folks to drive all the way to town to see a doctor, and that’s something that we need to take seriously,” said Rep. Amy Perruso, who represents Wahiawa and has been an occasional patient at Wahiawa General Hospital for more than two decades.

The loss of its obstetrics and gynecology department 15 years ago was a heavy blow. Perruso wants to see it come back. If the hospital wasn’t there when she was pregnant, she wouldn’t have made it to another hospital for the delivery, she recalled.

Wahiawa Health, the community health center nearby, began to fill that gap by offering OBGYN services — some of its doctors are University Health Partners who also work as faculty at the University of Hawaii — but women must still travel to other hospitals to deliver their babies.

“As births continue to go down in certain areas you can’t sustain it,” he said. “There’s not a big margin to pay for that.”

Cunningham is focused on “right-sizing” the hospital and tailoring specialty services to local needs.

Along with its emergency department, Wahiawa General offers short- and long-term care, skilled nursing and specialties such as cardiopulmonary services to serve the many geriatric patients who live in the area.

It also maintains imaging and laboratory operations — something that saves a lot of driving time for patients.

Wahiawa General relocated its outpatient rehabilitation department back on site and is taking physical, occupational and speech therapy patients.

The hospital is looking at ways it can partner with other hospitals and specialist doctors, by providing what it has in excess: space — something most hospitals don’t have.

As an additional source of income, it’s been a long-standing practice for the hospital to lease out business space to specialty providers. In January, Windward Orthopedics will use space a few times a month to offer rehabilitative orthopedic services.

That extra space could be used for substance abuse and mental health programming, he added.

The hospital submitted a proposal to the Hawaii Department of Health to lease its space for psychiatric and substance abuse services.

Former state Rep. Marcus Oshiro, a vocal advocate of the hospital and member of one of its three boards, said joining the Community Hospital Corp. network has greatly benefited the hospital. The Community Hospital Corp. is a 509(a)(3) charity that supports rural hospitals around the country and has assisted Wahiawa General Hospital to navigate medical billing and save money on supplies and equipment.

“It’s almost like becoming a member of a bulk purchasing membership,” Oshiro said. “I think it gave them savings of about $1 million a year.”

Over the next two years the hospital is embarking on a two-year plan based on the community health needs it identified in 2018, including improved access to mental and behavioral health services and finding avenues to assist patients’ access to affordable specialty care.

It’s also looking to hire a contracted psychologist for the hospital, provide space for Medicaid outreach workers, as well as pursue certification for a geriatric emergency department.

The Legislature has provided funding on a regular basis to keep Wahiawa General Hospital afloat. Those funds have been a contentious issue.

In 2019, legislators approved $1 million of its original $3 million grant request. But disbursement of that grant is still pending as of September.

In 2016, state legislators considered buying the land beneath the hospital and leasing it back for $1 a year, but ultimately decided to give cash assistance instead.

“While it will help keep hospitals afloat on a short-term basis, it’s not a structural answer,” she said.

“I’m concerned about how we’re going to meet the health needs of the community if the hospital continues to lose capacity for financial reasons,” she said. “It would behoove the state to strengthen health care in that area to actually cut down costs for us.”